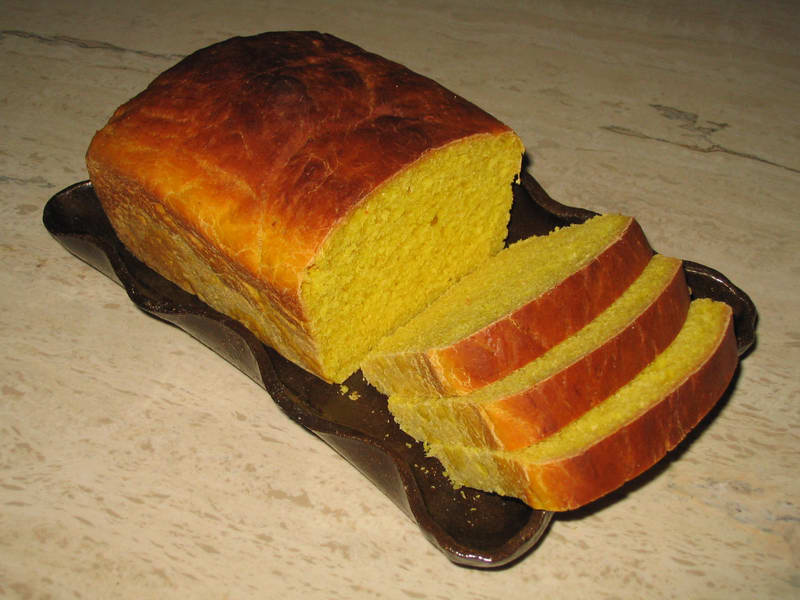 Peel pumpkin, cook well and drain water. In a large bowl mash pumpkin with a fork and reserve.

Bring the Fleischmann's Yeast to a cup, add a little sugar to help dissolve. When bubbles start to form, add it (and all other ingredients except the wheat flour) to the mashed pumpkin and mix well with an electrical cake mixer (you might need to use the type of blades for tough dough). Little by little add the wheat flour, always mixing well until uniform. It's when you will notice the dough coming off the walls of the bowl easily without sticking. When finished, let dough stand for a while until the volume doubles.

Grease with margarine 3 bread forms and pour in equal amounts (make sure the dough won't go over half way up the forms). Let it stand again for approximately half hour before bringing forms into a pre-heated oven at 200 °C and bake for 40 minutes. As soon as removed from oven, unmold to avoid excess of moisture (which could cause bread mold to form easily).

The baked bread will come out pretty large and it's a good idea to cut loaves into smaller pieces and freeze what won't be eaten on the same day in order to maintain freshness (thaw for 2 hours before serving).

Variation: Instead of pumpkin, try with sweet potatoes. It's delicious!